How does one choose a meaningful theme for an exhibition relevant to the whole family? And how can such an exhibition relate to the highly popular contemporary term “selfie”? When the Tel Aviv Museum of Art’s curatorial staff turned to examine these and related questions, the answers, as one might have expected, were not clear-cut. Sara Raiman Shor writes about the process of planning and producing a series of interactive exhibitions, with a special focus on the exhibition “My Selfie & I”

I would like to begin with a short anecdote: Last year, my children and I traveled to attend a soccer match between Eibar and Barcelona in the Barcelona stadium. We sat down excitedly in our seats together with 90,000 other spectators, waiting for the game to begin. About 15 minutes into the game, a young Japanese couple sat down beside us, equipped with smartphones and selfie sticks, and began taking pictures: One selfie against the background of the soccer field, another against the background of the audience, a selfie with a stick, without a stick, and so forth. Less than 20 minutes after the game had begun, they rose and exited happily. It is quite probable that, having photographed themselves, they proceeded to post the pictures on various social networks. Their friends, one may assume, were impressed to see them at the game. Indeed, they had been present in the stadium (for 20 min!). Yet did they actually experience the game and the excitement in the bleachers, or did they content themselves with capturing themselves against this background so that they could disseminate the pictures, and were now awaiting responses and “likes”? And what if nobody would “like” the pictures?

This question, which appears on the walls of the exhibition “My Selfie & I,” is one of several questions hovering in the exhibition’s “online” space. Other questions include: Why is it important for me to know what others think about my selfie? Who am I trying to resemble? Am I satisfied with myself? Does the selfie reflect what I truly feel? What, if any, are the dangers of sharing my selfie with others? These questions have turned selfies into a subject of critical discussion among exhibition visitors.

“My Selfie& I” is an interactive exhibition visited by children, teenagers, and adults. Yet in contrast to the clear-cut distinction between producers and consumers in conventional exhibitions, where visitors examine artworks created by others, this exhibition invites each visitor to become part of the display viewed by other visitors. The visitors’ self-photos are the point of departure, and their transformation within the exhibition space enables visitors to encounter themselves in a multitude of ways. 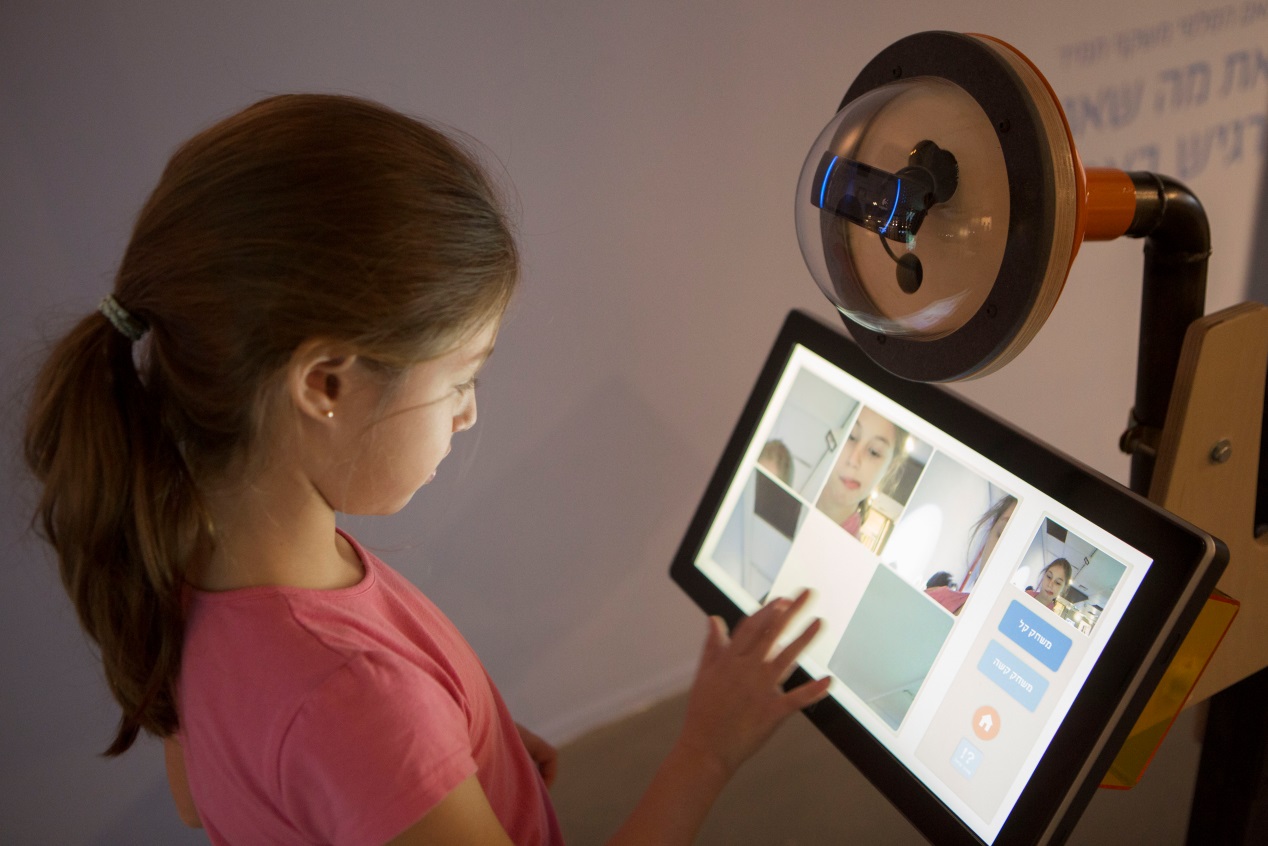 From the exhibition “My Selfie & I”, Tel Aviv Museum of Art

As visitors enter the exhibition gallery, they are invited to photograph themselves and appear on a large screen located at the center of the space, thus experiencing the sharing of their picture with other exhibition visitors. In some instances, the photographed images are reflected in various ways in a mirror likened to a selfie, while in other instances they are combined with the self-portraits of well-known artists.

Every exhibition designed for the whole family begins with a search for an innovative and meaningful concept. In some instances, the chosen theme is related to that of other major exhibitions held at the museum, while in other instances it is an independent theme. In both cases, it is related to the world of children and teenagers. 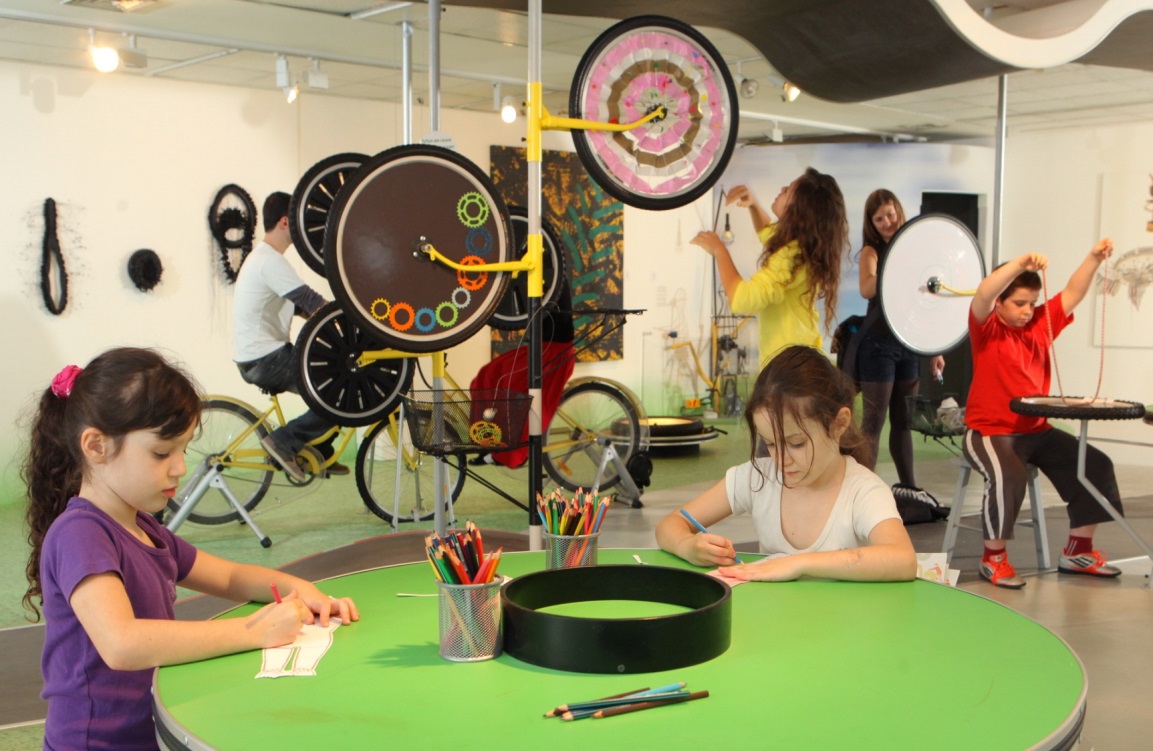 For the exhibition  “Art Any Way: Exploring the Wheel” (2012–2013), for instance, I chose the theme of bicycles, which became a popular vehicle in Israel given the dearth of parking spaces in urban centers and a new environmental awareness. The exhibited bicycles were related to the bicycle wheel (the first readymade) exhibited by Marcel Duchamp in 1913. Another example is the exhibition “”Along the Lines of Imagination” (2014–2015), in which the central theme was lines – ranging from the schematic lines that appear on the walls of ancient caves to the use of lines as a tool for drawing (outlines, perspectival lines), a characteristic of various painterly styles, and a means of sculpting in space. In order to expand upon this subject and make it accessible to children, the exhibition featured books in which lines play a dominant role such as Harold and the Purple Crayon)  and the series “The Line” created by the caricaturist Osvaldo Cavandoli.

In another exhibition I curated, titled “Facelook” (2011– 2012|), I examined the connections between the artists of the past and contemporary artists who paint human figures. Additional exhibitions – including “The Magic of the Circus“, “The Color of Water“, “Kadishman, Draw me a Sheep“, “The Object of My Fancy” – all appealed to children and to their world. Each of these interactive exhibitions featured original artworks alongside a range of traditional and technologically-based activities. 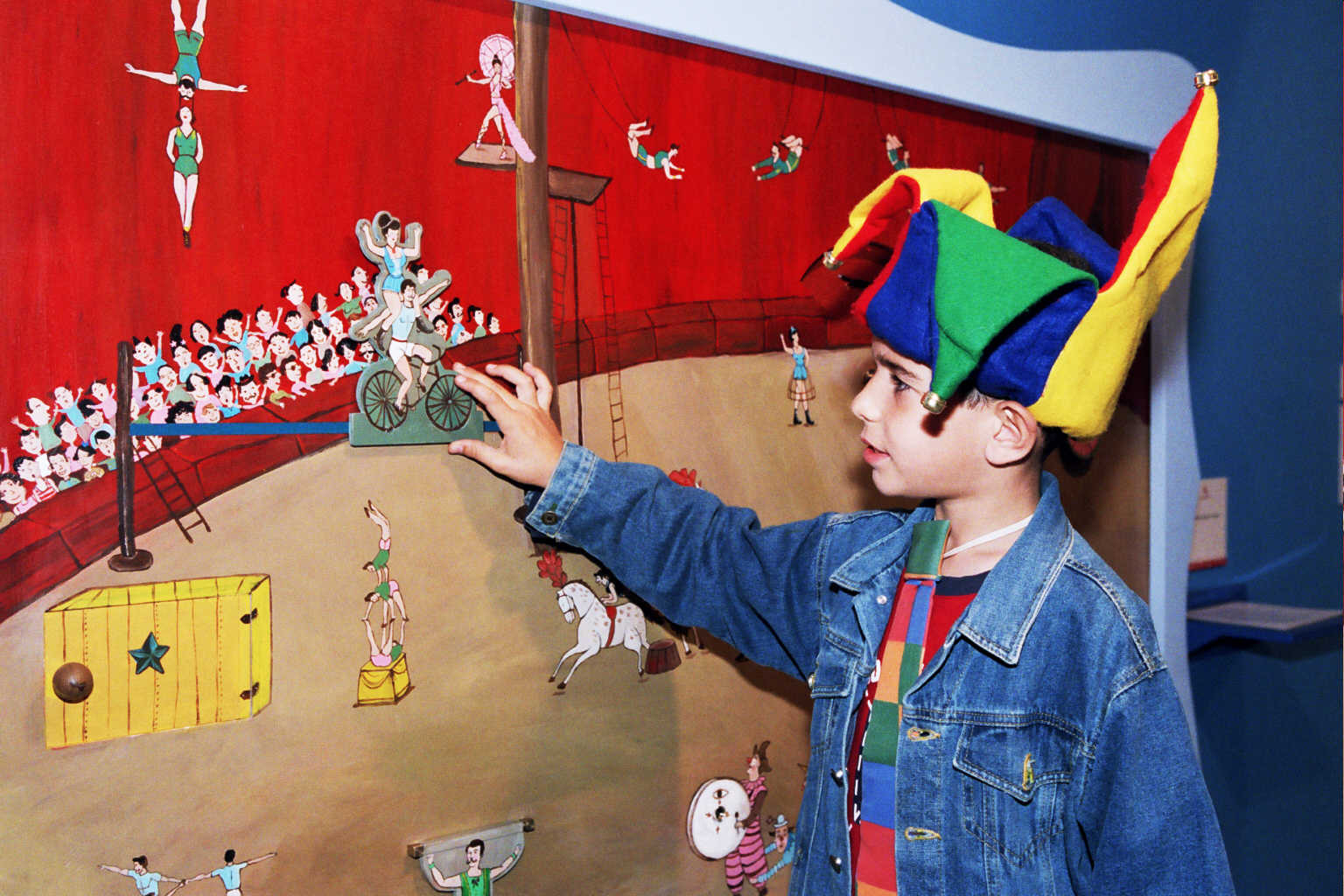 This time, I knew I wanted to create something new and different – something that would relate to the world of young people today, yet would not necessarily rely on works created by artists. And so, while engaging in general conversations about the relationship between technology and art, visual products, and photography – the theme of the selfie emerged.

Photographic self-portraits are not new. Photographers have been capturing their own likenesses since the invention of the camera, yet the process was quite cumbersome. And even when photographic technology became more sophisticated, self-portraiture was still not widely accessible. With the development of the front camera technology, the possibility of creating self-portraits became easy and immediate. Today,as we all know, one can upload such photographs onto social networks and distribute them instantly and directly.

Despite its attractiveness and relevance, this theme also raised various dilemmas and reservations: parents and educators are highly critical of the widespread use of smartphones among children and teenagers, and are concerned about the sharing of selfies online, which raises various dangers. These dilemmas led me to wonder whether this theme was indeed worthy of an exhibition, and if so, how I should treat it. I considered various questions, including: How is the education system coping with this new player in the field? Is the selfie indeed a problem, or is that only its perception by adults, whereas young people view it as a source of pleasure? And should this subject be ignored, or rather highlighted?

Other questions pertained to the field of museum education:

Should a museum dedicated to the exhibition of art feature an exhibition about a non-artistic subject? Is such an exhibition in danger of devaluating the status of art? Is this subject “high” or “low,” and how do we define these terms? Is the selfie a negligible daily act or a significant concern worthy of artistic attention? And could the engagement with this subject perhaps offer an excellent opportunity to tackle one of the most important themes in the history of art – that of self-portraiture? 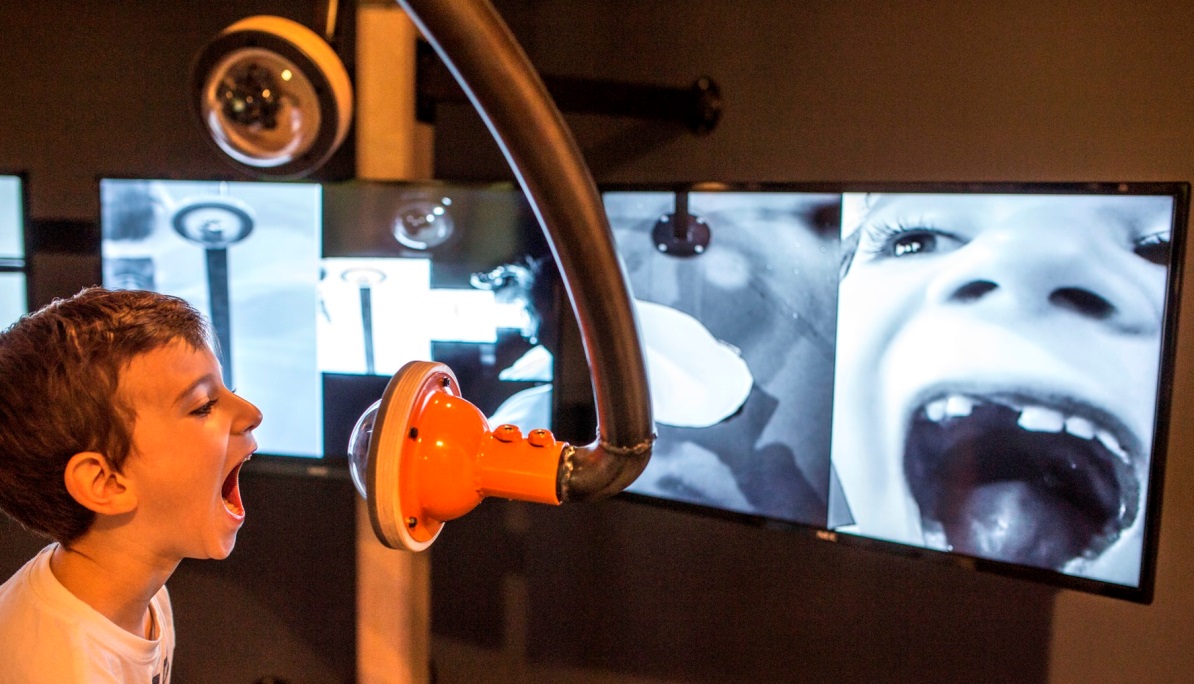 From the exhibition: “My Selfie & I”, Tel Aviv Museum of Art

The exhibition we ended up creating includes numerous activities, most of which are technological in nature. These activities aim to underscore the connection between the need for self-examination and self-expression, as embodied in portraiture, and between the “selfie” phenomenon.  The exhibition galley itself did not feature artworks, with the exclusion of one group of works in the foyer created by the duo Muntean and Rosenblum, whose work focuses on selfies and on their social and cultural implications.

An important place in the exhibition was dedicated to analyzing the differences between traditional self-portraits and selfies. One of the central activities offered on site was the invitation for viewers to examine themselves in a mirror and draw themselves on a sheet of paper framed by a painted cell phone frame. The response was surprising: hundreds of people of all ages sat and drew themselves with utmost seriousness and intention, and hung the completed drawings alongside those of other visitors and reproductions of artworks. 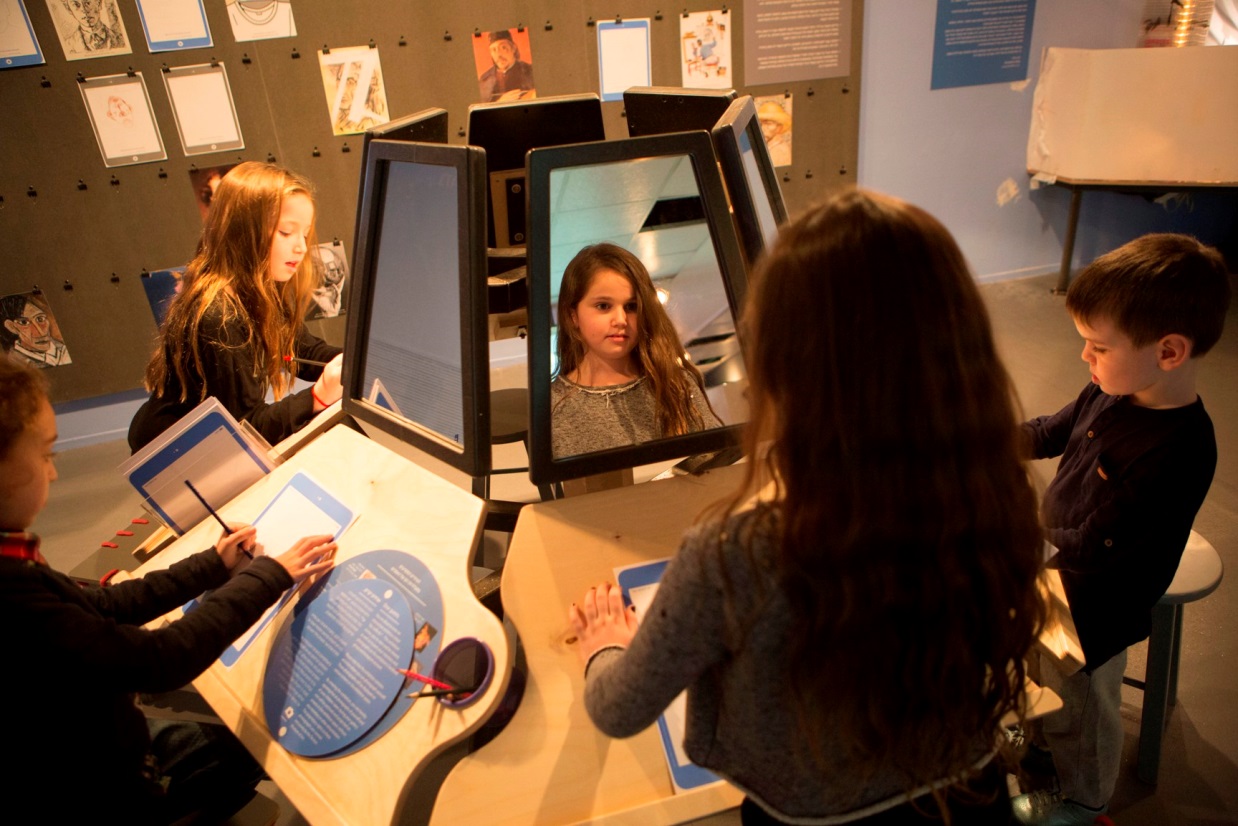 From the exhibition: “My Selfie & I”, Tel Aviv Museum of Art

The hundreds of drawings stapled onto the wall thus became traces left by exhibition visitors, who actually shared their work with others in a concrete manner rather than engaging in virtual “sharing.” Our surprising conclusion was that despite the excitement, enjoyment, and new possibilities offered by technology, the desire to make actual manual contact with a crayon and paper and devote time, thought, and effort to the creation of an actual, traditional drawing has not vanished, and has not been replaced by the click of a button or the swiping of a finger.

“We have finally been understood and respected”

A number of the answers to my dilemmas are hinted at by the statements entered by teenagers into the exhibition book. One of them wrote: “I really enjoyed the fact that we have finally been understood and respected for enjoying to look at ourselves!” The two key words – “understood” and “respected” – reveal that the choice of selfies as an exhibition theme was more deeply related to education and to its centrals values than we could have imagined. This comment leads to the second point I wish to discuss in this article: There is one fact that one can hardly argue about: children, teenagers, and adults all like to have their pictures taken. An existential, secular worldview provides a central place for the “self,” enabling artists and other individuals to give it visual expression. The roots of this phenomenon go back to the mythological story of Narcissus, who fell in love with his own reflection in the water. His infatuation with his own portrait was a punishment received due to his hubris, and he was forced to stare at it until he died of hunger and thirst.

Is our punishment in the current age to be captivated by this self-infatuation and to become addicted to it? And what are the consequences of this infatuation? Today’s photographer of selfies attempts to frieze time and store it in an online archive. What need does this strategy satisfy? Cynics will say: “I photograph myself, therefore I am.”

The selfie is rapid and superficial. It can be instantly effaced or disseminated uncontrollably online. Nevertheless, with or without the accompanying stick, it has garnered tremendous popularity in the course of just a few years, to the extent that the 2013 edition of the Oxford Dictionary chose it as the “Word of the Year.”

I do believe that despite the essential differences between selfies and artistic self-portraits, both may serve as a point of departure for studying ourselves. As a visual product on trial, the selfie’s place is indeed in the museum. The exhibition we created raises questions that are relevant to us all, and especially to our target audience – children and teenagers. These questions are taken from their world and the world of images that surround them, as well as from the history of art. They concern the limits of privacy, our self-image, our self-awareness, and our awareness of our social environment. They are the same questions that have preoccupied us human beings since time immemorial.